Article From The Now Newspaper 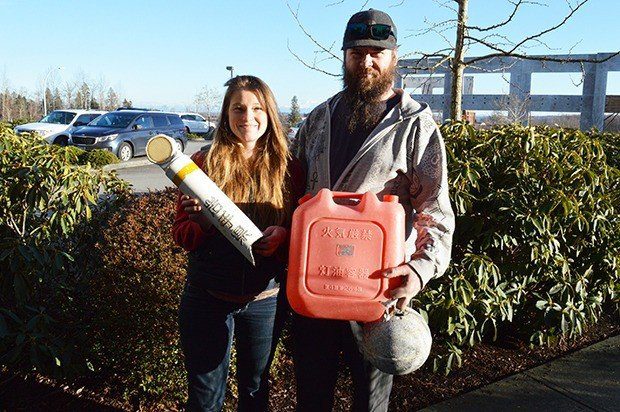 SURREY — Chloé Dubois has seen her share of plastic drink containers floating in the ocean off Vancouver Island, but it was the number of found shoes that surprised her most.

Such marine debris and “driftage” – 20 tonnes of it – was collected by two 17-member crews with Ocean Legacy Foundation during massive cleanup efforts last spring and summer, with assistance from community partners.

Chunks of styrofoam, bouys, nets, plastic toys and other stuff was pulled from the water by volunteers with the non-profit group, which Dubois and co-founder James Middleton run from their home in Newton.

Much of it was barged to a South Vancouver warehouse and then sorted, with the vast majority of it recycled or upcycled. In the end, only 518 kilograms of junk went to a landfill, Dubois said.

The so-called “Garbarge Project” was among the largest ocean cleanups in Canadian history.

“There were two loads of material that came in,” Dubois said of the effort, which was co-organized by the Vancouver Island Marine Debris Working Group.

The Lush cosmetics company donated the warehouse space for 14 days of sorting.

Dubois was shocked to see many not-so-wonderful things floating in the ocean off Vancouver Island, including industrial waste, rope, netting, tampon applicators and more.

“The magnitude of plastic pollution out there was actually a bit mind-blowing,” she said.

Money to cover some cleanup operation costs came from a Japanese government grant in the wake of the earthquake-triggered tsunami there in 2011.

“The rest of it has all been volunteer work,” added Dubois, who is originally from Ontario and has been doing such work for three years.

“What I love about this work is, we bring some volunteers in that have never done this work before, and it gives them an opportunity to experience what their plastic-consumption habits are doing to do the environment, firsthand.” The group’s work on Vancouver Island is funding-dependent, so they’re currently raising money to go back to the debris-collection “hot spots” near Nootka Island and, to the north, places like Kyuquot.

“We specifically head to an area called Muqwin Peninsula (or Brooks Peninsula), which is one of the most concentrated areas (for marine debris) on the west coast of Vancouver Island,” Dubois said. “We’re finding an average of three tonnes, or more, of material per kilometre along those coastlines.”

Next up for Dubois, Middleton and others is a trip to the Costa Rican coastline in March, to do three cleanups there.

“We’ve got funding in place for that trip, and we’re positive we’ll be doing at least one local, B.C. cleanup this year, too, although dates for that haven’t been finalized yet,” Dubois noted.

Read the full article:  Article From The Now Newspaper