ption habits of plastic and how we dispose of that plastic is really affecting our local communities as well as our global communities.” 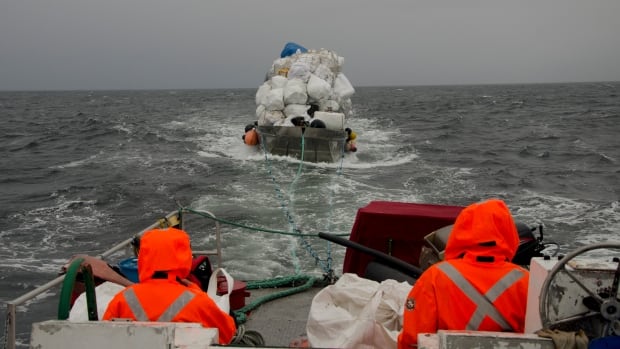 A crew with Ocean Legacy Foundation tows a barge of marine debris past Hesquiat Peninsula on the West Coast of Vancouver Island. (Chloe Dubois)

Volunteers with the Ocean Legacy Foundation hauled away about 20 tonnes of Styrofoam, buoys, plastic drink containers and more from Vancouver Island beaches over the spring and summer of 2016.

But that wasn’t the end of the story: the Surrey-based group took on the monumental task of sorting through that garbage and recycling or upcycling it.

“When we brought all of the material back into Vancouver, we had what I like to call the ‘Great, 14-day Upcycle Challenge,'” executive director Chloe Dubois told All Points West host Robyn Burns.

“This gave us time to find homes for all of the material we were finding. It was an event to engage as many community members as possible to repurpose, upcycle and reuse all of this material.”

Dubois says in the end, only 518 kilograms went to the landfill.

Dubois says a lot of the trash collected was from the 2011 tsunami. Most of it consisted of tires, buoys, Styrofoam, rope and plastic fragments. 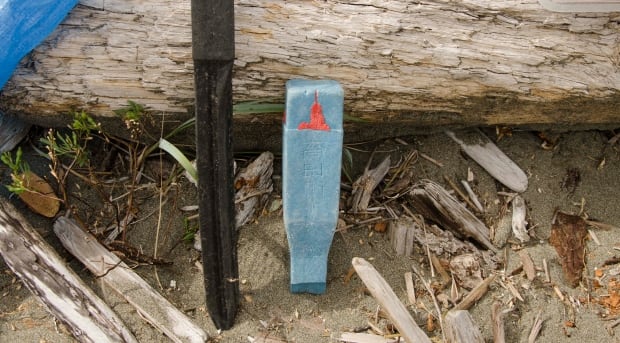 Debris from the 2011 Japanese tsunami, like this road marker, was a big part of the trash picked up by Ocean Legacy Foundation. (Chloe Dubois)

A “giant, overflowing” bag of shoes weighing 90 kilograms was given to artist Peter Clarkson for an art project, she says. Lush Cosmetics is recycling some plastics into new packaging and experiments are being done to convert some other plastics into a “mixed oil.”

“It’s been a number of years researching and networking and we’re at a point now where we’ve built the capacity where a lot of this is possible,” Dubois said.

“It’s really a matter of identifying each resin code and item and then working away and networking and trying to find the best use and end-of-life for this item rather than the landfill as our last option.”