JOIN US for The 14 Day Upcycle Challenge!

PLEASE CHECK OUT THE EVENT UPDATES ON FACEBOOK! OR READ ON BELOW - THE EVENT WAS A HUGE SUCCESS AND WE THANK YOU! (click here to go to the facebook event page)

This event is being organized so that the other half of the Gar Barge Project, roughly 200 bags of marine debris and some additional unsorted/ semi-sorted bags from the sorting celebration do not end up in the landfill!

PARKING: There is available free parking on site.

AMENITIES: There will be toilets, running water and power on site.

WHAT TO BRING:
-Gloves
-Waterbottle or coffee mug
-Snacks and Lunch

FOOD: To be clear- there will be an available kitchen on site with microwave. Please bring your lunch and snacks for the day.

The Electric Love Crew will be providing sound and gear for an open decks session this Saturday, OCT 8 to keep everyone moving and dancing while sorting materials. They will also be giving away Electric Love tshirts, tanks, tucks and a handful of tickets to their upcoming festival in 2017!

Come on out to show your support!
Please call 250 538 2328 to get involved or answer any further questions.

Members of the Vancouver Island Marine Debris Working Group include the following and are responsible for the organization of in-field debris collection:

We wanted to start by thanking all of the countless volunteers, the kind people of Japan, the Ministry of Environment, The Vancouver Island Marine Debris Working Group and the many sponsors who have made this good work possible! You are all the true heart of restoring crucial marine ecosystems. We would also like to acknowledge that land access was granted by many First Nations communities to the Working Group in order to clean and remove debris down the entire West Coast of Vancouver Island and that we will be sorting material on the unceeded lands of the Coast Salish Territory.

The 2-day sorting celebration that took place over October 1 & 2 was amazing (!!) but not enough time to get through all of the material. In order to continue this great sorting initiative, we have arranged an additional two weeks to sort and bale materials so that they can be repurposed and upcycled. This was made possible by the huge donation of a warehouse space and baler by LUSH Cosmetics. They have been more then accommodating and have offered as much assistance as possible.

BACKGROUND
These marine debris and driftage items were recovered from the remote wilderness of Vancouver Island. Over the spring and summer, hundreds of volunteers and sponsors contributed to the largest coordinated marine debris and drfitage cleanup along the West coast of Vancouver Island. There were two major loads of debris that were the result of these cleanup efforts. One, was an organized tug and barge that started from Cape Scott and worked South into the Broken Island Group, collecting roughly 300 bags. The second barge started along the South coast of Brooks/ MuQwin Peninsula and picked up bags down to the North section of Nootka Island. Between both loads we are estimating we have collected roughly 500 supersack bags, thousands of buoys, almost 200 tires, pallets, barrels and unidentified objects.

It is estimated that about 1/3 of the material collected over this season is from the devastating tragedy of the 2011 Tōhoku earthquake and tsunami. This earthquake was registered at a magnitude of 9.0 (Mw) and reported 15,894 deaths. It is with care and respect that we help to recollect this drfitage and return some of these items back to the Japanese people. We thank the Japanese people for their generous and thoughtful gift which allowed this work to happen.

The load to sort!

It has been our upmost priority to arrange after life solutions for this debris to the best of our ability. Last year we were able to purchase our first plastic to fuel machine to begin converting various plastic resin codes back into a usable fuel.

*** We will again have our demonstration plastic to fuel machine running as an example of sustainable end of life solutions to a lot of this plastic debris.*** Come watch bottle caps turn back in fuel!*** 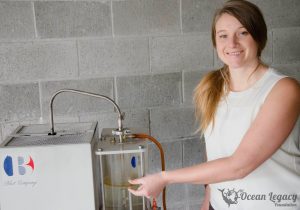 Plastic to Fuel with our founder, Chloe Dubois 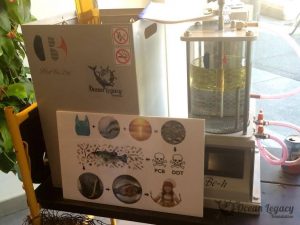 Drop in trash and out comes gas!

3 thoughts on “JOIN US for The 14 Day Upcycle Challenge!”

Plastic superhighway: the awful truth of our hidden ocean waste